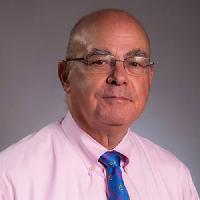 Yonas played a key role in establishing the UNM Department of Neurosurgery following a long career at the University of Pittsburgh. During his tenure, UNM’s programs in clinical neurosurgery and neurosurgical research have expanded.

Notable achievements include the establishment of the 24-bed Neurosciences Intensive Care Unit, development of a multi-specialty neuroscience outpatient clinic and the creation of a statewide telemedicine network for evaluating and managing acute stroke. In addition, the Department’s resident training program has received full certification from the Accreditation Council of Graduate Medical Education.

Yonas is the 2015 Neurosciences Award recipient and was one of two recipients of the 2014 UNM Presidential Award of Distinction.

Yonas obtained his medical degree from The Ohio State University. He completed an internship and residency in neurosurgery at Case Western Reserve University and also served in the U.S. Air Force as a flight surgeon. He later completed fellowships in microsurgery in Zurich and in Pittsburgh. He joined the University of Pittsburgh faculty in 1978, became a tenured professor in 1988 and was named the Peter J. Jannetta Professor of Neurosurgery in 1995. He served as the vice chair of the department and the Director of Cerebrovascular Surgery. Dr. Yonas helped create and served as the co-director of the University Of Pittsburgh Medical Center Stroke Institute.

He is also involved in developing new technologies to improve the understanding and treatment of cerebrovascular and traumatic disorders of the brain. He helped develop and implement the use of quantitative cerebral blood flow measurements using a combination of stable xenon inhalation and CT scanning.