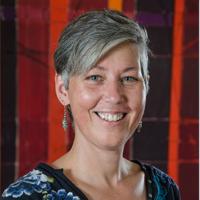 Map of Science
Felicia Mancini has been a Certified Nurse Midwife in Albuquerque, New Mexico for eighteen years. She came to the university in 2007 after ten years in private practice.

Born and raised in New York, Felicia received her B.A. from the University of Washington, and joined the Peace Corps. She served in Mauritania, West Africa for two years, where she was introduced to midwifery. Upon returning to the United States, Felicia attended Columbia University and completed a Master's program with an emphasis on maternal and child health and family planning. She moved to San Francisco where she received a Masters in midwifery, and gave birth to three children. Soon after completing her degree, she moved her family to Albuquerque to begin her career as a midwife.

In addition to her work as a midwife, Felicia researches postpartum health, with a focus in perinatal mood disorders. She has conducted a research study focused on the development of screening programs for postpartum depression, which was published. This screening program has been in use at UNM since 2008. In 2013 Felicia and her colleagues completed a second study looking at the effects of yoga on postpartum depression, and is preparing it for publication.